Exactly ten years ago, in 2007, on a chilly February day Katrin Sarieva and me headed off to the lawyer’s office to finish preparing the documents for the registration of the Open Arts Foundation. Half way, right next to the Jumaya mosque in Plovdiv I stopped and told Katrin I didn’t want to start a foundation. I came up with all sorts of reasons – that what was important for us was our gallery, that the name was very general and all-encompassing, that a family foundation is a great responsibility and would put us into a certain public position which I wasn’t sure I wanted to serve etc. Katrin just looked at me and said, “Yes but there’s no other way. We must.”

I quickly went through the situation one more time in my head, I thought about all we had done so far and I couldn’t help but agree with her and take the risk of this “we must”. For two years already between 2005 and 2007 we had been working on projects that obviously called for a foundation. We had partners, we had taken on responsibilities only without perceiving ourselves as a figure, without wanting to be one. Until 2007 we worked on plans, activities, projects (such as the Night of Museums and Galleries since 2005 and the I Love Plovdiv campaign from 2005 to 2006) which had already shown positive change in our institutions and city; activities which had a strong social, public and media response and even followers. This positive result of our work motivated us. We went ahead and registered our organisation. But our style of doing things first, seeing them happen and only then packaging, taming and realising what we’ve done remains unchanged ten years later. Our office in 36 Otets Paisiy Str, our core team and our logo came much later.

This laboratory style of work called for knowledge, attention and respect of the environment and the main factors within it, innovative thinking and viewing problems in a concrete and engaged way. This is why we focused on things we know and love. We developed three programs Night of Museums and Galleries Plovdiv, City and Culture and Educational Program (in contemporary art). We realized that if we want change, we need to bring about change for others, change which would allow them a dignified existence as themselves. For many people who worked with us, for our projects, even for our partners the Open Arts environment and laboratory were an incubator and a start. And this is exactly where our approach proved successful and our activity became an indisputable and specific, unique factor on the cultural and social scene in and for Bulgaria. This openness, innovation and visionary activity and lack of packaging often made populism and the political measurement of the Open Arts factor impossible which confused both our fans and those who wanted to compete with us. Tensions that left a smile on our faces as we worked hard in our laboratory environment.

Today, ten years later, on the eve of an anniversary, we find ourselves in very much the same situation – we can either package and celebrate or just wave our hand and say: this is not enough, “we must” work more, we’ll see you in another ten years. And we say “we must”. We must because we want to celebrate with you who supported and believed in us, who together with us did and made happen, because we want to show what it was like in these ten years which were very important for us, for our city, for the milieu and for the country, what was seen and what remained hidden, who contributed to this and how.

Of course we’re tempted to say more but for now we’ll focus on working with our great team on important projects which are part of our 2017 anniversary program. We look forward to meeting you at the celebrations on 15, 16 and 17 September during Night/Plovdiv. The Night will feature a special comprehensive anniversary program of events and initiatives under the title 10 Years of Open Arts – Here Еverywhere. We have the pleasure of developing this program in cooperation with curator Vladiya Mihaylova.

Until then, follow our activities bearing the 10 Years Open Arts anniversary logo done by Punkt Studio.

Open Arts Foundation was established in an important year for the new history of the country. Than Bulgaria joined the European Union and continued the ongoing processes of economic, social and cultural integration. However, the first day of January 2007, was rather an emotional event with a great psychological impact. More visibly the country has started to overcome the long years division of its existence; firstly, being on the one side of the Iron Curtain, and then facing different visa regimes and constant comparisons between “here” and “there”, we and the others (in the West). The openings up of the borders, the new technologies and social networks have brought a different perception of a world that is HERE EVERYWHERE. Through its projects and work “Open Arts” takes part in this world and shares the values it brings. Searching for new spaces, building up networks, thinking about the city as a common place of share and experience, expending the knowledge through contemporary art and culture are the directions of the Foundation’s work. They are also ways to communicate and live together. Therefore the jubilee program for the tenth anniversary of the Foundation has this motto precisely today when the ideas for a shared world have been facing different barriers. 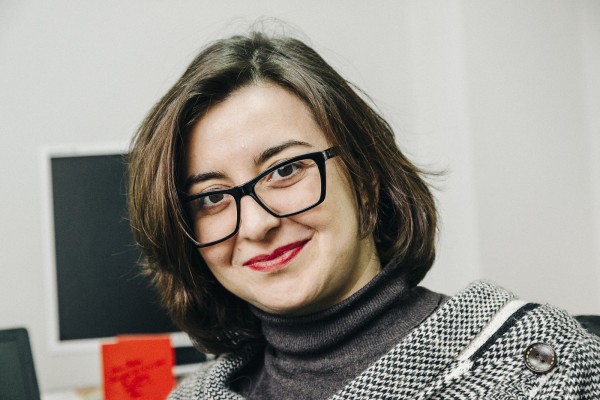 Vladiya Mihaylova is a curator and a cultural historian. Since 2007 she has been part of Sofia City Art Gallery’s team as a curator in the “Vaska Emanouilova” gallery where she works with the programs for contemporary art and the museum’s archive of the gallery. She is interested in cultural history, contemporary art, social, political and educational aspects of the institutions for art. Mihaylova has collaborated as curator with artists for projects in public spaces, self-institutionalizing platforms, educational initiatives, etc. Among them are long-term projects with high impact as “Project 0″ by  Kiril Kouzmanov (2010-2014) for the Kapana district in Plovdiv; 0gms A Gallery in Drawer with Ivan Moudov (2010-2013); she’s also initiator and curator of the ongoing project “’90s. The Beginning of the Myth” (2015 -) focused on the popular culture in Bulgaria during the period of transitions. In 2015, she curated an edition of Sofia Queer Forum. Vladiya is also a member of the main working group (in the field of “Visual Arts”) developing a proposal for Strategy of  the Independent Creative Scene in Sofia – “Shared Vision” (2016). Over the years she attended various curatorial courses and has researched contemporary artists in Sweden, Austria, Italy, Germany and others. She is the author of numerous articles published in catalogs of artists, biennials, publications on art and in the cultural press in the country and abroad. Vladiya Mihaylova has participated and curated art projects in Night/Plovdiv 2010, 2015 and 2016.