Plovdiv, Night of Museums and Galleries
September, 21 – during the Night of Museums and Galleries – Plovdiv
“An introduction to contemporary art” is an educational platform initiated in 2011 by Open Arts Foundation and Sariev Gallery and developed together with curators and art historians. All events are run at different structural stages – a specific educational course, open lectures, discussions with artists, etc. The necessity to generate the context of Bulgarian contemporary art motivated the concept for “An introduction to contemporary art”.

The platform’s first stage in 2011 was an educational course held at The Warehouse /+/, Sofia, contributing with theoretical knowledge and introducing into the details, terminology and specificity of contemporary art.

The forthcoming event in the spring of 2012 is “Artists Talk” at Sofia City Art Gallery and “Sunday Lectures” at Vivacom Art Hall. The last talk from this platform will be held in September during the Night of Museums and Galleries – Plovdiv.

ARTISTS TALK – AN INTRODUCTION TO CONTEMPORARY ART
ARTISTS TALK  is a series of meetings with leading Bulgarian artists from the world art scene. They will bring us closer to their work by sharing practical experience from their rise on the world art scene and will reveal their views on society and the world in the light of contemporary art. The artists invited are: Stefan Nikolaev, Ergin Cavusoglu, Nedko Solakov, Plamen Dejanoff. The talks will be moderated by Vessela Nozharova. 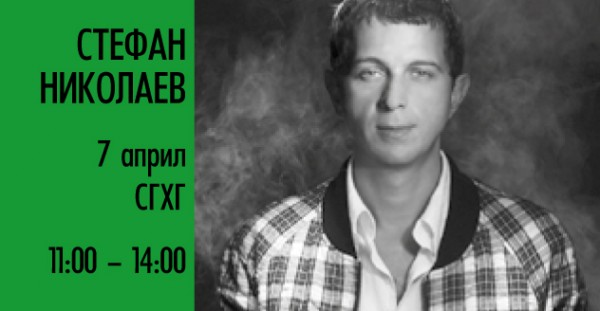 PLAMEN DEJANOFF (born 1970 in Veliko Turnovo, Bulgaria) graduated from the School of Applied Arts in Tryavna with woodcarving and then studied at the Art Academy in Sofia. In 1992 he graduated from the Fine Arts Academy in Vienna. He specialized at the MAK Center for Art and Architecture Los Angeles, Musashino Art University– Tokyo and participated in the International Artists’ Studio Program in Sweden. He has participated in many exhibitions in New York, London, Madrid, Vienna, Hamburg, Leipzig and Cairo. He had solo exhibitions at Palazzo Ducale, Genova, at the Museum of Modern Art MUMOK – Vienna, Palais de Tokyo – Paris, MOCA Museum of Contemporary Art – Shanghai.

SARIEV GALLERY is a private gallery, founded by Katrin and Vesselina Sariev in September 2004 in Plovdiv. The gallery has had two stages in its development and from the autumn of 2009 began work on a new exhibition policy Sariev Contemporary – with the mission to present internationally Bulgarian contemporary art. Thanks to the careful selection of artists and its active work, today Sariev Gallery has become an engine and communicator of contemporary Bulgarian art. Sariev Gallery is at the core of the three organizations which are working on their founders’ idea – development of city culture, contemporary art and creative economy. The two other platforms are Open Arts Foundation and artnewscafe Plovdiv. www.sariev-gallery.com

OPEN ARTS FOUNDATION was founded in 2007 in Plovdiv. The Foundation’s main mission is reflecting, energizing and communicating the city with the means of art. Its activity is oriented to creating, developing and producing its own cultural projects. The annual platforms consist of projects and events in three main programs: Night of museums and Galleries, City and Culture, Film programme. In 2011 Open Arts Foundation started the Educational programme for Contemporary Art and Collectors’ Forum. www.openarts.info

VESSELA NOZHAROVA (born 1974) is a freelance curator and art critic. She holds a Master Degree on Art History from the Art Academy, Sofia. She has worked at The Union of Bulgarian Artists, Irida Gallery and Ata – centre for contemporary art. From 2003 to 2006 she was programme manager for visual arts at the Red House Centre for Culture and Debate, Sofia. In 2007 she was curator of the Bulgarian Pavilion at the 52nd Venice Biennial for Contemporary Art, and in 2008 – assistant curator of the 11th Architectural Biennial in Venice.
She has curated a series of exhibitions in Bulgaria and abroad. In 2008 she was one of the founder members of Art Affairs and Documents Foundation.