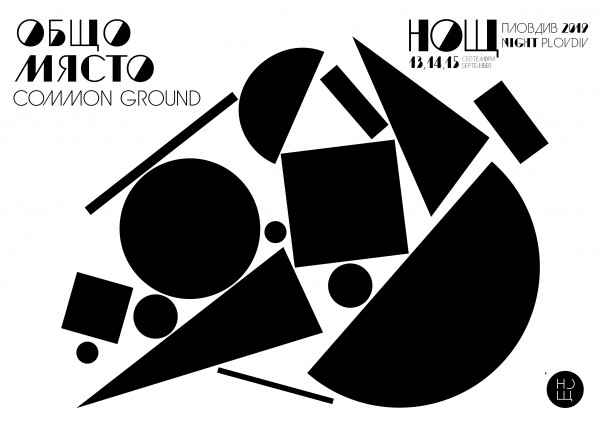 This year the curated exhibition of NIGHT/Plovdiv 2019,  prepared by Vladiya Mihaylova, was focused on the Old City and tried to show another image and athmosphere of the place. The included projects were presented from the Eastern gate to the Danchova house, the Blue house and Stabolyan house, inviting the audience to enter trough the “back”, not so well known, entrance of the Old city, little familiar to the tourists of the city and even its inhabitants. Even not that big, this place is loaded with history from ancient times until reneissance and modern Bulgaria. Without necessarily looking for a connection with the past, the presented works, intepreted trough the contemporary views problems and topics, which are part of the memory of the place itself: about the communities, about the others (the foreign ones), about the practicies which connect people, about the right of chice etc. What does community mean for us today? How does it change, which are the old and the new communities, what is the point of their existence; what are the possibilities, which community gives to the individuals for them to achieve (freely) their place among others. Part of the exhibition deals with the policies of memory and identity, another – with the failed projects for universal values, third part focuses on the individuals, their right of choise and interactions eith the others or deal with the different cultural layers in time and how they shape a specific entity, which we accept for obvious without asking questions.

In an ironic manner, Kalin Serapionov shows with  In Addition, 2008 the clichés which the universal messages and hopes for peace, individual happiness, wealth and good life have become. Daniela Kostova presents The Higher Ground, 2018, with which she creates a strange metaphor for the corruption of values andfamily, as well as for the decline of America as a world power, bearer of future and of universal messages of freedom, equality and democracy.

Nilbar Güreş with her works Elsewhere’s Palm Trees, 2012-2018 / Identity, 2013 / Run, 2011-2018 and Selma Selman with Viva La Vida, 2016 focus on the individual’s right of selfdetermination,their wish to “hatch” from the cocoon of the family and the kin, or literally to buy themselves out, establishing their own world and rules. The strong femininity is the basis for building new spaces, for empathy and laying foundations. In the work of the two artists, it is a political gesture and message.

Samira’s poetic and sincere story in Dor Guez’ video Sabir, 2011, however, told in partin Arabic, in part in Hebrew, is penetrated by the “big” war events, the exodus ofthe Christian families and the disintegration of the coziness of the home and thecommunity.

Kateřina Šedá** manages to give thinking about the community another opportunity, such that brings people together, helping them to overcome estrangement, to meet and see each other. Her work for the Líšeň district in the Czech city of Brno – For Every Dog a Different Master, 2007, demonstrates how the artist can be a mediator of public processes that unite people and provoke them to communicate with one another. The artist participates with one more piece – Bring Yourself, specially created for Plovdiv and the NIGHT, in which she works with family photographs of various Plovdivian families. Irrespective of their social status and peculiarities, they are put on an equal footing, and their living environment becomes part of the very exhibition.

Unique answer to the question how we can imagine the “common space” is given by Zuza Golińska* with her sculptures New Tools, 2019, which comprise abstract “studies” of the contemporary public (common) space of the cities, seen through the eyes of a birdor a drone. They are dominated by the idea of togetherness through forms that are mutually balancing each other but stay separated from each other at the same time.

In the yard of the Danchova house the documentary-essayistic film IN-VISIBLE by Kamen Stoyanov shows not only an unusual viewof a city, but also poses and puts the question of what can emerge behind the visible and the known.

With the project A HorseHas No Concern the Japanese artist Saori Hala** silently asks how attribution and dependence anchor us in the world of power, class and pressure. Horses had been used since ancient times as a symbol of power and labor in human society. Even in Bulgaria, which was under Ottoman rule, there was a law prohibiting the construction of churches higher than the human eye-line on horseback. The social functions formerly played by horses are now replaced by technology, but still equestrian statues and pictures from around the world remain assymbols of the power of former heroes. Even though we never know what the horse itself is looking at with its magnificent beautiful eyes. It is not only such an idol that is left in this world. We still can not escape from finding the place of our own personal identity and at the same time thinking about the social structure linked to it.

Vera Hadzhiyska reverts to the partially shrouded events from the Bulgarianhistory  and trough the With the Name of a Flower project studies the forceful change of the names of the Bulgarian Muslims (from Arabic/Turkish names to Slavic/Bulgarianones) in Bulgaria in the period 1912 – 1989 in the historical context of the Ottoman Rule (1396-1878), post-Liberation Bulgaria, the Balkan wars (1912-13) and the Revival Process (1984-89). Such events are considered from a family and a personal viewpoint, examining the memories of people who were directly affected by the change of names and their successors. The artist is interested in how these historical events have affected the cultural, religious and national identity of the Muslim communities in Bulgaria and their collective memory

The sculptor Anton Tsanev creates especially for the place and for NIGHT/Plovdiv 2019 the work Gate – sculpture, a temporary intervention in the urban space, part ofthe programme of NIGHT/Plovdiv. The project studies the gates as a place of personal and social transformation. Place of meetings and separations.The Eastern gate at the end of the Old Town of Plovdiv was built in 2 c. inthe time of Emperor Hadrian and was a kind of filter of the city, built by a huge triple portal, combined with a hospital. Today the place has kept this spirit of a border and encounter. The installation forms a portal of three columns, based on sign elements for the construction of gates – Keystone, Dovetail and Large-headed nail.