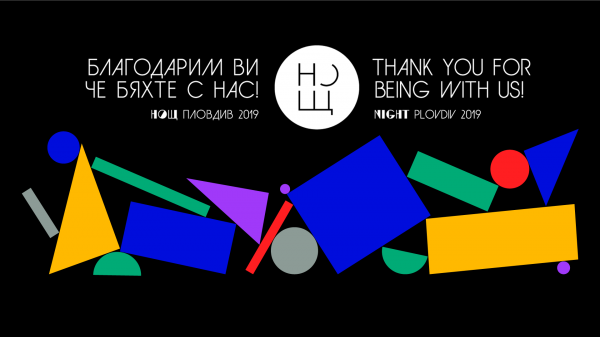 On the 13, 14 and 15 of September took place the fourteenth edition of NIGHT/Plovdv – a special one for the year of ‘Plovdiv – European Capital of Culture 2019″. The festival’s team wants to thank all contributers and participants in the NIGHT.

We are leaving you with memories from the from the NIGHT, in which happened more than 180 events, prepared by the traditional Plovdivian participants and institutions, local and international artists and supportive partners.
SEE THE MEMORABLE MOMENTS OF NIGHT/PLOVDIV 2019 HERE 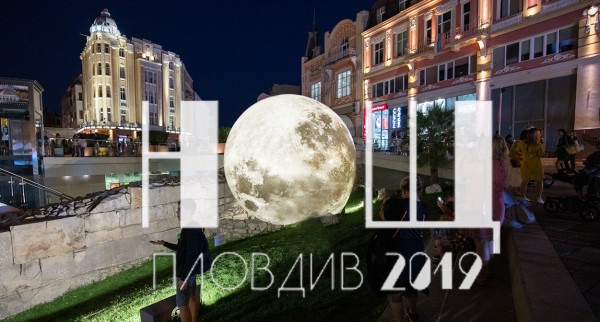 Over 70 thousand people filled up the city streets in the three evenings of NIGHT/Plovdiv. The festival offered to the audience over 180 events at 81 locations.   The cultural program offered many artistic projects, presented by the Plovdivian museums and galleries, Bulgarian and international artists. All Plovdivian museums (Archaeological, History museum, Natural History museum, Ethnographic, Municipal Institute “Ancient Plovdiv”, Museum of Aviation) actively participated in the festival with exhibitions and events.

Highlights from the events in the museums were the exhibitions, created and presented especially for NIGHT/Plovdiv – “Historical monuments and art antiques preserved in the Plovdivian families” by the Archaeological Museum and “With a French sabre and a long-barrelled rifle…” by the Ethnographic museum. Another exhibiton created and presented especially for the NIGHT at the National Library Ivan Vazov was “Plovdiv through the lens of the first photographers” – a mutual initiative of the library and the Regional State Archive directorate in Plovdiv.

Other highlights in the festival program were: the inter-dimensional ritual  „A.S.T.R.A.L.O.R.A.C.L.E.S.“ at the Roman Stadium, realized with the support of the American Embassy in Bulgaria as well as the audio-visual performance “Ground Control” at the Ancient Theatre, which was supported by the French Institute, Sofia.

The digital module of NIGHT/Plovdiv “Creative Media Lab” for the first time presented all the projects in its frameworks at the Plovdiv Drama Theater, in partnership with the theater. In the presentation “Tessera by tessera: the past of the “Bishop’s Basilica of Philippopolis”, realized in cooperation with America for Bulgaria Foundation, was presented the project of the Bishop’s Basilica by its archaeology team, lead by profesor Elena Kantareva.

The Plovdivian artists once again opened their studios for the NIGHT as this year six of them presented their exhibitions, screenings, presentations and even a guest concert by the trendy Plovdivian band “Kerana i Kosmonavtite”.

The former Detmag Snezhanka (now Kapana Gallery), which during NIGHT 2017 was discovered as a space for culture with the anniversary exhibition HERE EVERYWHERE, was once again an important spot in the NIGHT with the exhibition “Open Art Files: Notes and Footnotes“, curated by Vera Mlechevska.

The exhibition presented artworks, created during the 80s and 90s by over 50 Bulgarian artists and included educational panel with tours and lectures. The exhibition was of high interest to the audience during the NIGHT and during its active period – 16 August – 30 September, attracted more than 8000 visitors.

This year the NIGHT also presented a special project – an urban intervention, realized in partnership with Matera 2019. It consisted of two Moons – instalations, which were placed at the Roman Stadium and at Nebet Tepe. Besides marking the fourteenth edition of the NIGHT the installations were celebrating 50 years from the first man landing on the Moon and became emblematic for the festival edition in media and social networks

Highlights in the children program were the performance and workshops Mini Art Circus at Saedinenie Square and the workshops at the Museum Centre for Contemporary History of the Regional History Museum, which took place in partnership with Muzeiko.

The international participation in the festival this year included artists from USA, Japan, Austria, France, Czech Republic, Poland, Sweden, Israel, Bosnia and Herzegovina, Turkey. Most of the artists presented works under the motto COMMON GROUND, which not only gave direction to all projects in the festival, but also was developed as a special curatorial exhibition in the Old Town, under the curatorship of Vladiya Mihaylova. The program presented an unknown image of the most emblematic Plovdivian area.

Exclusively for the festival evenings were presented artworks of Bulgarian and International artists at 4 locations, following one red line – from the Eastern gate to Danchova House, where was the main exhibition, accompanied by the Blue House (Pavliti) and Stambolyan House. They were inviting visitors to ”enter” trough the back entrance of the Old City – slightly familiar not only to the tourists but also to locals.   The presented artists were – Dor Guez (Israel), Nilbar Gures (Turkey), Zuza Golinska (Poland), Daniela Kostova, Selma Selman(Bosnia and Herzegovina), Kalin Serapionov, Katerina Seda (Czech Republic), Kamen Stoyanov, Saori Hala (Japan), Vera Hadzhiyska, and Anton Tsanev.

Especially for the NIGHT was also the opening of the evn collection exhibition in SKLAD, which brought together the artists Franz Kapfer (Austria), Lazar Lyutakov (Austria, Bulgaria) and Martina Vacheva (Bulgaria), who created a surrealistic atmosphere with their characteristic contemporary artworks. The Austrian input was also present with FLUCA – Austrian Cultural Pavilion, which presented especially for the festival an opening of an exhibition by Markus Krottendorfer but also various party program in the three festival evenings.

In the party program of the festival took part more than 10 local bars and clubs, the official party of the NIGHT took place in the first evening at the Military Club.

The rich program of the festival for the fourth consecutive year was available through the special mobile application nigh.bg for iOS and Android developed for the NIGHT by MentorMate. The application was entirely upgraded for this year’s edition of the NIGHT.  The implementation of the entire program and the successful organization of the festival evenings would not have been possible without the help of the many interns and volunteers who joined the last but very important stage of preparation. More than 60 volunteers and 15 interns helped with various activities at the festival, providing their energy and enthusiasm. We thank all the participants, partners and colleagues for their trust in us as organizers of NIGHT/Plovdiv 2019 and for their support for the realization of the festival.

FIND MORE IMAGES FROM NIGHT/PLOVDIV 2019 AT OUR FLICKR CHANNEL