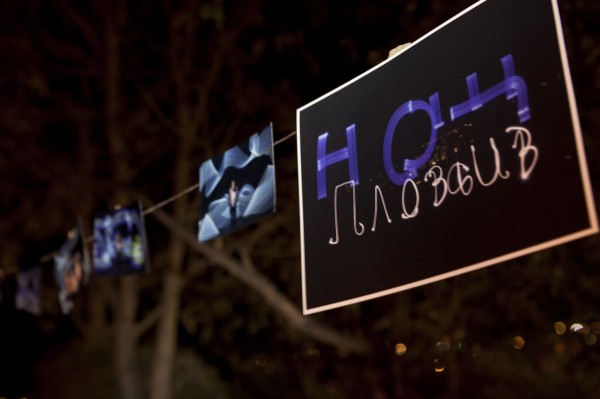 The twelfth edition of the NIGHT welcomed over 40 000 people on both festival evenings in the city under the hills. The cultural map of NIGHT/Plovdiv, 2016 this year offer more than 140 events at 70 locations in the city. Along with the already traditional programs “Museums and Galleries”, “Culture and Club”, “City and Public Spaces” and “Little Night” the festival presented a special program called “Open Arts”. Through it the foundation as a basic organizer of the NIGHT and with the help of their loyal partners is strengthened as a producer and co-producer of content. At its core, “Open Arts” is a multi genre program prepared by professionals – curators, selectors and experts in various genres, which continues the vision of the foundation to seek, to experiment and push the limits of traditional forms and understandings of art.

NIGHT is proud to welcome this year a lot of international participants and special guests from France, Korea, Austria, Germany, Israel, USA, Italy and the Netherlands.

For another year, by the already traditional fund “Special Projects”, together with the Municipality of Plovdiv and America for Bulgaria Foundation, we were able to support 31 participants who have created special content for the festival. Detailed information about the funding for 2016  you can find here. 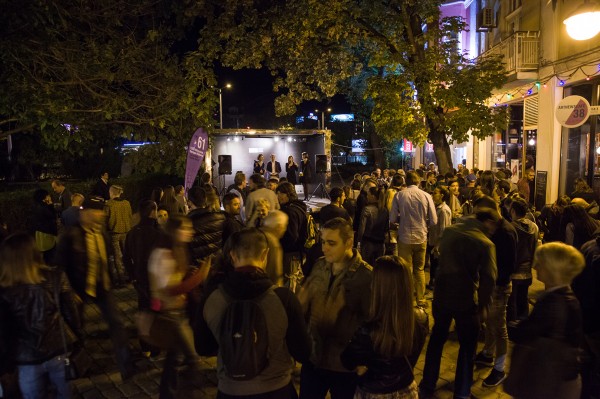 Highlight in the NIGHT of the 23rd were several key locations, which officially opened in the presence of artists, organizers and, of course, the audience. “The color of the Cosmos” presented in a delicate way versions of the history of Kosmos cinema in the presence of the author Maxim Bondue, curator Emile Ouroumov and project partners from the French Institute in Bulgaria. FLUCA – Austrian cultural pavilion is the new art space in the heart of the city, that was officially opened again in the presence of artists from Austria, the curator Ursula Probst and Mr. Thomas Stoelzl – the Deputy Chief of Mission of the Austrian Embassy in Sofia. The NIGHT was cinema thanks to the US Embassy in Bulgaria. The selection of Maya Vitkova and our special guests from the American Film Institute gathered in an intimate setting people with an affinity for short films. All music fans enjoyed the music stage at Sahat Tepe and the Absolute party with Peter Kruder, who kept the audience dancing until early in the morning. Art lived in galleries, museums and all spaces included in the map of NIGHT/Plovdiv. Queues of people turned up at the solo exhibition of Nedko Solakov at SARIEV Contemporary gallery, as well as at the exhibition “Un/noted” by UBB in the City Art Gallery of Plovdiv, which was visited over 7 000 people in the first night of the festival.

On the 24th most of the new formats in the festival like “Actors vs. poets” and “15 minutes of fame”, gathered an enviable audience. The interactive projects part of Creative Media Lab raised particular interest among the young audience. The interactive exhibition was presented by the curator Petko Tanchev and our special guest from Israel – Barak Koren, together with the Israeli Ambassador H.E. Iritis Lillian and friends of the NIGHT – Jewish organization “Shalom – Plovdiv”. The project is a new module in the program of the NIGHT that aims to present in a different way the relationship between art and new technologies, offering an interesting and accessible to the audience format with live interactions and presentations.

The link between the old town and Kapana quarter was hold by the exhibition “10×10: Faces outside the frame”. Another project that was socially committed and could be recognized with a cause was the project “I Love the Hate” of Reporteen, followed by a “Faust” performance by the Dutch guest Maarten Vonk. Screening of “Hamlet” part of the global program “Shakespeare lives”, organized with the help of the British Council, thrilled the audience in the Lucky Cinema. Nebet Tepe lit the NIGHT with a project of the Center for informal education and cultural activities ALOS – Drawing with light. ATOM Theatre`s collaboration with Korean choreographers impressed the audience with their first project together – Common Ground, contemporary dance in the space of the Small Basilica, as well as a special performance supported visually by Barak Koren in the hall of the Military Club as part of the Creative Media Lab on September 25th. 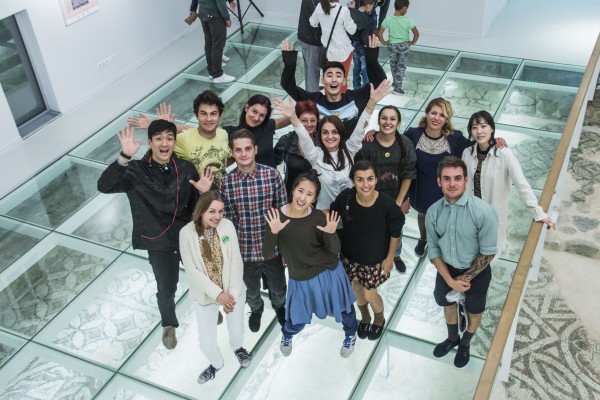 For the youngest visitors of the festival there were a bunch of activities, experiments and workshops in daylight part of the NIGHT. Special guest in the children’s program was Muzeiko that comes out of Sofia for the first time and managed to thrill all children with its presence at the Regional Ethnographic Museum.

We proudly present another participant taking part for very first time in the NIGHT – the Catholic cathedral, which prepared special content for the festival – vocal performance of the Catholic choir, thematic lecture and lecture tour. Four studios of the artists Boris Rokanov, Lyubomir Krastev, Dinko Angelov and Dimitar Shopov opened their spaces and presented exhibitions in their working environment. America for Bulgaria Foundation joined in the festival by also organizing a guided tour and meeting with archaeologists in the Big Basilica for the first time before the completed excavation and restoration. As new locations of the festival will celebrate the new art spaces – Small city gallery, P.A.R.K. store, Studio 24, Coffee Gallery for Contemporary Art – Cu29, as well as new members of the club culture in the city – Bar “Otsreshta”, Bar “Sandak” and Post-cultural scene. 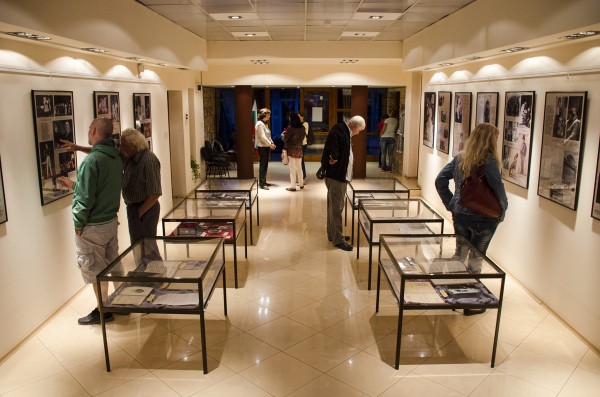 Regional Archaeological Museum welcomed more than 7 000 visitors, which is more than in the last year’s festival. Our friends from ALOS have published more than 150 photos from the project “Drawing with Light” and in general in the location of Nebet Tepe passed over 4 000 people.

Most of the participants in the festival shared with us that they have made useful contacts during the NIGHT, which quickly built into specific ideas and future projects. For us as organizers this is very valuable feedback and makes us happy that we provide a platform for sharing and development of cultural activities.

This year we successfully continued our partnership with Mentor Mate dedicated to the mission of making the orientation and selection of events easier for the huge audience of the festival.  Mentor Mate were the ones to develop in 2015 the mobile application – night.bg. The app has been updated and improved, and it was used by more than 2 000 people. IOS users have tripled compared with last year, while those of Android grew by 30%. Thanks to Max Telecom we gave away 2 prizes through the mobile application – a mobile WiFi router with 200 000 MB per month.

We again gladly worked with the team of studio PUNKT, which again created a nice visual identity of the festival. KEY Events & Communication took care for the ad campaign and PR. They help the NIGHT to be heard and widely publicized – in 5 national TVs, on 6 national radio channels; to be online and offline in your hands through dozens of articles and interviews. Along we engaged over 230 000 people in the social networks and reached an audience of over 800 000 people.

Important role in promoting the program and artists played our special media – the blog of the NIGHT. The blog team produced 42 publications and met us with a total of nearly 60 interlocutors from Bulgaria, Austria, USA, South Korea, Israel, England and the Netherlands. The most viewed videos from the blog reached 10 000 views and over 30 shares in the social networks.

This year, the NIGHT also grew as a team – with over 80 volunteers, 21 interns in the photo team, 9 interns in the blog team, 7 interns in coordination team that with endless energy, desire and dedication helped us to organize the biggest cultural event.

Co-Organizers of the NIGHT/Plovdiv, 2016 are our loyal partners of America for Bulgaria Foundation and Municipality of Plovdiv. The event welcomes for the first year UBB and VISA as key partners of the festival.

We are grateful for the support and confidence our institutional partners built: Austrian Embassy Sofia, Department of Art and Culture at the Federal Chancellery of Austria, the Embassies of the US and Israel in Bulgaria, the British Council, French Institute in Bulgaria, Seoul Foundation for Arts and Culture, Jewish organization “Shalom ALEYHEM” – Plovdiv, National Fund “Culture” and the MF “Plovdiv 2019″. For the realization of the key activities of the festival in 2016 Open Arts was also supported by Lidl, Absolut, Staropramen, MentorMate, EVN, Ataro clima, Star Hotel, Max Telecom and others.

Partners of the volunteer program of the festival were TimeHeroes and Supa Bar.

More information about the festival, the program and the artist you can find in our social channels.