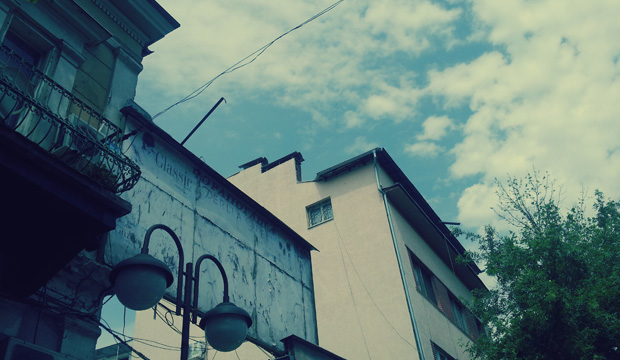 Open Arts Foundation starts a contest for art design of an abandoned billboard near the restaurant “Goldеn pear” at Otets Paisiy Str. The contest is part of the “Otets Paisiy Str. – Behavior”,2013 festival.

Idea of the contest:

Billboards are one of the most arrogant bearers of advertising messages. They are at every corner, on every kilometre of the motorway; they abruptly attract your sight with their empty promises and sometimes even go out of their 2D framework, in order to convince us with their brave slogans.

There are no large billboards on the narrow Otets Paisiy Street. Apart from one. And exactly this sole billboard has been sinking into idleness for years, with the last traces of past ads slowly fading away. The history of the billboard commences in the beginning of the 90s, when the owners of the house decide to advertise their family business – tights production. Led by their entrepreneurial spirit, they install the advertising construction over their small shop by themselves. A large board oddly connects two very different in function and outlook buildings – a shabby power substation and the house of the family in question, designed by the famous Italian architect Mariano Pernigoni (who is also the architect behind the central train station in Plovdiv). In those years, when streets used to be free of ubiquitous advertising, the size of the billboard were really impressive – 5 x 2.5 metres. An interesting fact is that it is bigger than the actual shop and its messages have probably reached as far as the Monday market. Nevertheless, times are changing, the street and the business – too. The billboard is now obscured by new buildings and it can’t be seen from further than the opposite pavement of Otets Paisiy Street. At present, the sad billboard silently provokes nostalgic thoughts about the street, the tights and the behaviour of passers – by who take a glance above their head so rarely, that such constructions have become meaningless in contemporary advertising.
As a part of the Otety Paisiy Street Festival, which has been focused and inspired by the street for years, Open Arts will activate the dysfunctional advertisement and will transform it into a place for advertising alternative artistic behaviour.

Visual artists of all backgrounds are welcome to participate in the contest for new design of the desolate billboard, next to Zlatnata Krusha restaurant. The goal of the contest is to provoke artists to discover new ways of visually enriching Otets Paisiy Street in harmony with its ambient and history and to turn the attention to the issue of our attitude towards desolate places and objects from our every-day life.

How:
All who want to participate can send digital images (or digitalized ones), together with a short CV and a description to the emails, stated below. The deadline is 26 May 2013 and all of the entries will be passed forward to the jury. The work of the winner will be printed on vinyl in the sizes of the billboard (5 x 2,5 m) and will be fixed to it during the festival Otets Paisiy Street 2013 – BEHAVIOR. The spot will be lastingly branded with the name of the project and its author. The exhibition of the image is long-term and the latter will not be taken down after the end of the festival!
The image should reflect the author’s interpretation of the topic OPposition (Otets Paisiy + position) and the specifics and history of the billboards to have a strong site-specific character. It is recommended that Otets Paisiy Street is included directly or indirectly, visually or conceptually. We accept all kind of images – design, photography, cartoons, etc. We also welcome experimental projects, which ‘go out’ of the billboards’ framework.

Prize:
Printing and fixing of the vinyl with the size of the billboard, next to restaurant Zlatnata Krusha on Otets Paisiy Str. The vynil will be exhibited for a long time, detailing the name of the author.

Jury:
Katrin Sarieva (historian and gallerist)
Boyka and Tzvetelina Velichkova (owners of the house and the billboard)
Veselina Sarieva and Stefka Tsaneva – organizers of the Otets Paisiy Steet Festival

Technical specifications: file formats; CMYK TIFF или EPS (1:1 from 30 to 150 dpi).
Additional requirements: TIFF files – those have to be free of routes and masks, they have to be saved with LZW compression and not to contain layers. EPS files – texts need to be in curves.

Please send entries to the following email: info@openarts.info until 26th May 2013.

Contest for art design of an abandoned billboard near the restaurant “Goldеn pear” at Otets Paisiy Str.