Presentation by Hannah Hurtzig: Blackmarket for useful knowledge and non-knowledge 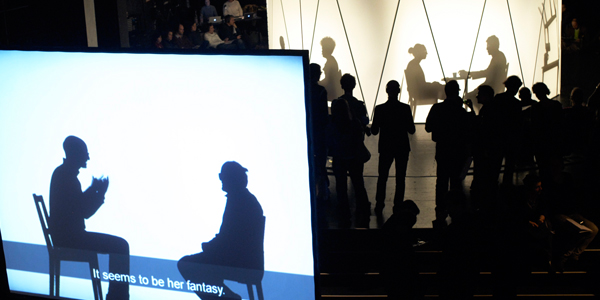 The creative showroom “Mobile academy” develops different formats of scientific meditation: theatre installations for representing memory, space and rhetoric, live events with the participation of 100 experts, film installations on the topic “Narratives about places, cities and territories” and together with this presents different models from archives of films and recordings. In 2012 one of the projects will be carried out in Plovdiv: “Black market for useful knowledge and non-knowledge”.

Hardly there is a topic which “Black market for useful knowledge and non-knowledge” would reject. Since 1995 the Berlin-based playwright and cultural producer Hannah Hurtzig has been experimenting with different forms of producing and distribution of knowledge. “The black market” is her most well-known project to date which has been presented in seven countries.

The place and the topic determine the choice of around a hundred experts who are invited to share their knowledge with the audience for one night. This meeting, however, does not follow the classic theatrical model, but passes in an intimate conversation two by two. After that is turn for the dinner with strict choreography: the clients register in the beginning and book meetings with one or more experts. Each talk lasts 30 minutes maximum. In the meantime everyone can listen to the separate discussion with headphones.

The voices buzzing from the many personal talks blend into one verbal “carpet”, into a spatial and dynamic installation of learning and forgetting. For Hannah Hurtzig this is “space for observation and producing”. As it is in theatre, “the initial place for open debates”, the transfer of information becomes a “collective whisper for passing on knowledge”.

In 2012 “Mobile Academy” will visit Kapana district in Plovdiv, where “Black market” will be carried out with the participation of local actors as well as established experts under the name “Let’s talk money”. On this occasion on December 7 (Wednesday) at artnewscafé, Hannah Hurtzig will present a documentary about the project “Mobile Academy”.

Hannah Hurtzig is a freelance playwright, guardian and writer from Berlin. She was artistic director of Kampnagelfabrik in Hamburg and playwright at Volksbühne, Berlin. In 1999 she established the “Mobile Academy” in Berlin from which the “Black Market” emerged in 2005. Her projects were exhibited at international festivals as well as at Manifesta 7 (Bolzano, 2008), La Biennale (Venice, 2009), Van Abbemuseum (Eindhoven, 2010).

Blackmarket for useful knowledge and non-knowledge

With the kind support of Ghoete-Institut, Sofia