CREATION OF MUSEUM OF CONTEMPORARY ART IN BULGARIA 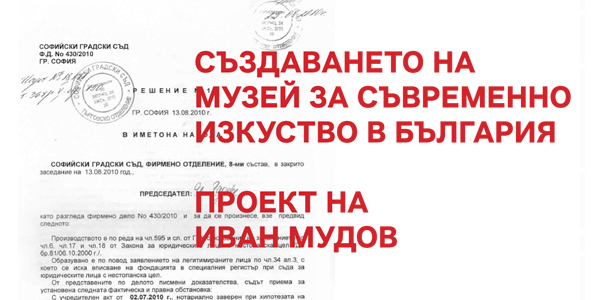 Five years after his infamous fictional MUSIZ – Museum of Contemporary Art was staged in Sofia*, artist Ivan Moudov has started the legalization of the first real private museum of contemporary art in Bulgaria.

This process will be presented in a special exhibition at the Plovdiv Museum of History / Bulgarian Reunion Hall on 24 September, at 7 p.m., during the Plovdiv Night of Museums and Galleries.

In June this year, Ivan Moudov received an invitation from Vesselina Sarieva of the Open Arts Foundation to take part in the Plovdiv Night of Museums and Galleries by building on his previous work on MUSIZ – Museum of Contemporary Art. The artist’s response came in the form of a proposal to register the first real private museum of contemporary art in Bulgaria. On a grant from the Open Arts Foundation, he hired a lawyer and filed an application in accordance with current Bulgarian legislation. At the moment of writing, the museum’s file is with the Ministry of Culture which is expected to make a decision on it within three months.

In addition to the application’s documents, the exhibition contains a video with the story of the process to date, as told by lawyer Radoslav Paroushev, as well as various objects related to the history of MUSIZ over the past five years. During the opening, Moudov will also take part in a discussion on the problems of contemporary art in Bulgaria.

The project was implemented with the support of the Open Arts Foundation and the America for Bulgaria Foundation.

* In 2005, Ivan Moudov staged an opening of a fictional museum of contemporary art in the Podouyane Railway Station in Sofia. A large crowd of officials, diplomats, cultural managers and artists gathered outside the station in anticipation of the event, before finding out that the posters and press coverage which had drawn them there were fake. Moudov’s goal was to focus the public’s attention on the need for a contemporary art museum in Bulgaria.

/ supported by
America for Bulgaria Foundation