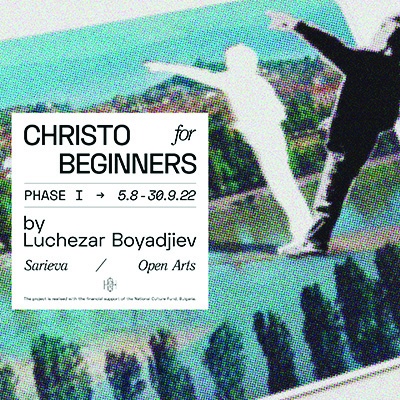 “Christo for Beginners” by Luchezar Boyadjiev is a project about what’s private and shared in both the physical space and the imagination. The artist engages with the public space and that involves the urban, the media, and the virtual environment. Luchezar Boyadjiev is activating them with artworks, visions, exhibition displays, actions and lectures while involving the collaboration of both his fellow citizens and colleagues. Luchezar Boyadjiev is a known expert on the projects, the practices and the methodologies developed and used by Christo and Jeanne-Claude. However, this is the first time he is implementing such a project as an artist, rather than as an art critic, a theoretician, a lecturer or a historian of art. “Christo for Beginners” is the pilot project of the Sarieva / Gallery and the Open Arts Foundation within the Sarieva Open Arts program.

Exhibition opening, info zone with works and other materials by Luchezar Boyadjiev

(Gathering of the group of participants in front of artnewscafe, 10:30)

For good and/or for bad, in our country, just like elsewhere in the Balkans, our centuries-long history is both alive and constantly challenged, everywhere by everyone. It tends to create the conditions for the production of much more actual reality – living, breathing and throbbing with energy, then our multitude of small states and proud peoples can realistically handle. Sometimes the world history is “unloading” all its might on our Balkan shoulders. But we are pretending not to notice our chaotic vitality; indeed we are living here and now as if this is the “always and everywhere”. The heroes, the leading characters of these ages-long processes either already have dedicated monuments at 5-to-15 meters high, or are the targets of constantly debated projects for such totems, idols and fetishes of the long-gone past.

What might happen though, if the debate on saturating the public space in our cities with monuments of the glorious past and heroes, is supplemented by the whole register of art and culture heroes from the modern and contemporary age? For instance, does Belgrade need a monument to Marina Abramović? Does Zagreb need a monument to Mangelos (www.moma.org/artists/29439); to Sanja Iveković or Ivan Mestrović? Does Sarajevo need a monument to Braco Dimiriević or to Jusuf Hadzifejzović although these two are very much alive and kicking artists? We do have a monument indeed to Vladimir Dimitrov, the Master but do we also need to have monuments to Boris Angeloushev and George Papazov in Sofia, or to Jules Paskin in Vidin? How big do these need to be, and where are we to place them – where they lived or where we need to impress both ourselves and the tourists? Should they be 10, 15, or 20 meters high? And last but not least, whet kind of visual style do we need to ask for from the artists who would compete with their visions in a public tender?

The goal of the project “Christo for Beginners” is to create a space for debate and to kick of this debate – asking questions about the past, as well as about the future in our culture. The first stage of the project “Christo for Beginners” by Luchezar Boyadjiev within Sarieva Open Arts program will manifest an “exploratory mandate” for the creation of a massive, equestrian monument to Christo in Plovdiv. The so titled exhibition in Sarieva / Gallery and the „Walk and Talk” lecture tour given by the artist in the city environment will investigate the format, the locations, the public attitudes and the fantasy needed for the erection of such a monument.

The exhibition will display the scale model for the monument created by Luchezar Boyadjiev, his project drawings, visualizations and other material. Within the format of the „Walk and Talk“, we will walk to and talk about various potential locations for the erection of the monument.

Luchezar Boyadjiev (Sofia, 1957) is among the most prominent artists, born and based in Bulgaria. An author with extensive international practice, he is a public figure with a clear critical stance on the Balkan and international art scene. As an artist, curator, and lecturer, he contributes to establishing new definitions of art and practice, to new discourses and to the emancipation of a younger generation of artists in his home country. His media ranges from drawings and painting, to photography, installations, video and his, by now famous guided tours/performances in various cities, and art exhibitions. Luchezar Boyadjiev is one of the first in his generation of artists that have put down the foundations of contemporary art in Bulgaria after the mid-80s. With background in art history and theory, Boyadjiev creates art that defies both traditional norms and the social conditions of his country; in his work the whole ambivalence of the socialist past is put in relation to global changes.

Over the years, Luchezar Boyadjiev has participated in numerous biennials, group exhibitions, conferences and residencies spanning from Sao Paulo to Gwangju, and from Santa Fe to Singapore, as well as most everywhere in Europe. His works are part of museum, corporate and private collections worldwide.

Sarieva / Gallery was founded by Vesselina Sarieva in September 2021 as a third generation gallery space. Sarieva / Gallery represents leading artists from the Bulgarian contemporary art scene. At the same time, it is not only a space but a gallery situation, a program and a statement in art which extends beyond any physical borders while encouraging dialogues and the deeper knowledge of the artists’ works. The abundant, ambitious and innovative program reaches beyond the model of either the white cube or the black box. Sarieva / Gallery is part of the hybrid environment of Sarieva HUB together with the Open Arts Foundation and other related organizations.

The Open Arts Foundation was established in 2007. It is recognized as one of the main factors in the cultural life of Bulgaria that has changed the cultural environment and the audiences’ expectation through its well-known projects such as the NIGHT/Plovdiv, “Introduction to Contemporary Art”, FLUCA – the Austrian cultural pavilion, Open Art Files and many others. Open Arts Foundation provides access to art and creativity, builds up concepts and projects at the crossroads between culture, art, the city and its inhabitants, visitors; it rediscovers locations while making new life possible in unexpected places.

(Gathering of the group of participants in front of artnewscafe, 10:30)

>Presentation and moderated conversation with the artist and experts