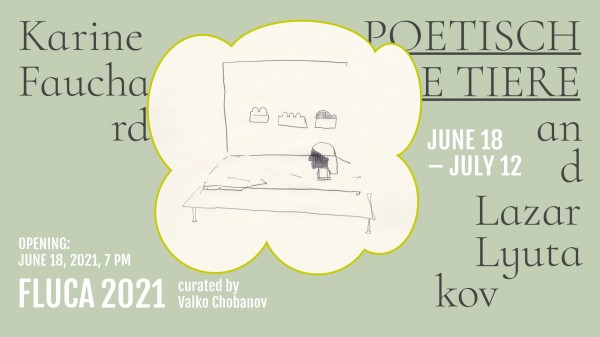 His father told him that story: his father looked at him through a glass: he had a hairy face.

He was baby tuckoo. The moocow came down the road where Betty Byrne lived: she sold lemon platt.”

— James Joyce, Opening to “A Portrait of the Artist as a Young Man”

The hermetic space of the Fluca container, designed to serve the transfer of developed industry goods on a global scale, will be turned into a place for an experiment inspired by archaic construction techniques with organic materials. Between rational and poetic, concrete and abstract, the indeterminate and the exact. A site-specific work by Austrian female artist Karine Fauchard and the Austria based artist of Bulgarian origin Lazar Lyutakov. Specially created for the space of Fluca – Austrian Cultural Pavilion, the exhibition will be their 4th collaborative project. 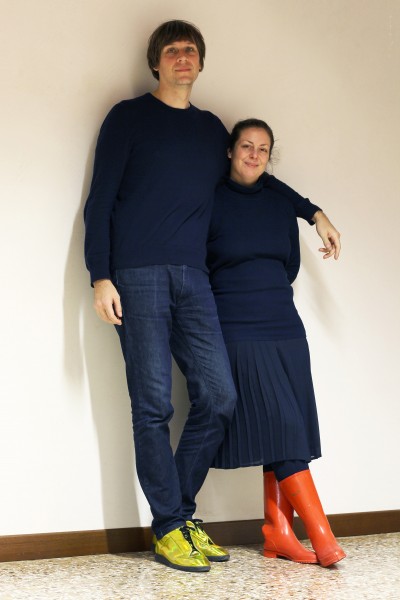 Karine Fauchard was born 1976 in Meudon la forêt (FR), she studied at Ecole Nationale Supérieure des Beaux-Arts in Paris (1998–2004) Her practice spans across various media such as painting, drawing, sculpture, installation, photography, video and mixed media. Materiality is the underlying theme of her work as well as the idea of the process and the development of site-specific concepts. Her works have been presented in Austria and internationally, including the Gallery Cité des Arts Paris (2018), Vin Gallery Vienna (2017), 6th Moscow Biennale for Contemporary Art (special project, 2015), Fotohof Salzburg (2011), Daejeon Museum South Korea (2010). She has received numerous awards such as the Austrian State Scholarship for Fine Arts, the ENSBA – Prix de gravure or the Prize for Young Artists of the Lafayette Gallery Paris. Since 2007 she is co-directing the exhibition space Baba Vasa’s Cellar in Bulgaria together with Lazar Lyutakov.

Lazar Lyutakov was born in 1977 in Shabla, Bulgaria. He studied at the National Art Academy in Sofia and graduated at the Academy of fine Arts Vienna in 2005. His works were included in the 58th International Art Exhibition of La Biennale di Venezia, where he and Rada Boukova represented Bulgaria (2019), the 6th Moscow Biennale (special project, 2015) and the 1st Vienna Biennale in MAK – Austrian Museum of Applied & Contemporary Arts, Vienna (2015). He participated in numerous exhibitions worldwide and has held solo exhibitions among others at Georg Kargl Permanent (2015), MAK Vienna (2011) and One night stand gallery in Sofia (2017). In his artistic practice, Lyutakov reflects on contemporary conditions of production and forms of consumption, on money and commodity flows and on aesthetic mass phenomena. Carefully chosen objects and crafts, adapted and enhanced by selective interferences point to the contrast of the unique and the serial and speak about values, productivity, quality and use in an industrialised, post-capitalist world.

Artistic differences, the life and work of Poetische Tiere

The fragility and sensitivity of Karine Fauchard’s work is like a long held breath, poised on the edge of something, an afterwards or perhaps still waiting to take place. Whether ruins or divinations, her ephemeral marks and objects, scattered and tenuous, explore and communicate this feeling of contingency. Sometimes it’s expressed by the materials, as in Dead Flower Bouquets (2015), or the clay pieces strewn underfoot in her exhibition Vulkanische Aue (2019), works arranged around gravity. But often it’s the compositional logic of Fauchard’s work that is evasive, as if offering itself to an external force that might complete it. This openness is what gives Fauchard’s work its extraordinary sensitivity, something the curator Anne Faucheret describes beautifully: ‘Fragments are the recurring milestone of her work, dispersion is its strategy of consistency.’

To say it another way, Fauchard’s work carries its outside within it; evoking it, expressing it, involving it in ways neither the artist nor the work tries to control or contain. This is not simply to abandon the works’ meaning(s) to their reception (a modernist commonplace dating back at least to Bakhtin), more than this it is to explore the contingency of not-knowing as a compositional principle, one that appears as not yet, sometimes exuberant and sometimes melancholy. Fauchard’s work embraces this uncertainty as its generative principle, and her confidence in and commitment to this (anti-)method is what gives her work its strange and subversive power. Her refusal of resolution, and her embrace instead of an open process that continues forever, like Nature, is an aesthetic and ethical commitment to complex ambiguity. Her work is defined by these obscure relations, marks of colour caught in the wind (Vulkanische Aue 2 and 6 (2017), undetermined possibilities rather than concepts or representations. Chaotic systems.

This gives Fauchard’s work its diffidence, even shyness, but also its delicacy and casual elegance. Everything remains open, only the event is missing. The closest artistic reference is Arte Povera, with which Fauchard shares a focus on the common place, on “poor” materials, and an insistence on their expressive (instead of representational) qualities. Here, materials are processes rather than objects, and the artist is only a part of what happens. This puts the artist in the middle of things, but the artist is no longer herself, she is a breath, a break, an almost accidental line or smudge, a succession of unrehearsed touches. All this announces her presence in a series of traces that might, or might not, have been important. This, I think, is the definition of a Poetisches Tier.

Let’s turn then, to the exhibition Poetische Tiere, made with the collaboration of her partner Lazar Lyutakov, and held at FLUCA, the Austrian Cultural Pavilion in Plovdiv, Bulgaria. This show seems, unlike so much of Fauchard’s work, to have been quite deliberately composed. It has four basic elements: three works by Fauchard from her Cloud series (and previously seen in her 2017 exhibition Rubikon); a larger-than-life size plastic bust of Lyutakov made by his friend Nanyo Nanev when they were 16 and studied at the famous art-school in Plovdiv; the floor of the space that is covered in a mixture of straw, donkey shit and soil, a peasant technique Lyutakov learnt from his Grandmother; and finally the reciprocal curation of the first elements, Fauchard selecting the bust of Lyutakov and Lyutakov choosing her Cloud works for the exhibition.

Including other artists as a part of her work has precedent in Fauchard’s practice. In her ongoing work Jewellery Collection she asks fellow exhibitors to lend her a piece of jewellery, which she displays in a museum showcase for the duration of the exhibition. This collaboration gives the work an (auto)biographical aspect, and in the case of Poetische Tiere becomes a reflection of Fauchard and Lyutakov’s own relationship. As Fauchard herself remarks, how could such an exhibition be anything but relationship therapy? Whether or not this therapeutic aspect is visible, Fauchard’s selection of Lyutakov’s bust certainly has some critical intentions. This head, she claims, embodies the heavy academic tradition taught at Plovdiv’s art school, its bronze patina imitating public monuments produced there to this day, its heroic gaze mimicking that of the workers populating the works of Socialist Realism, a style imbued with all the dreams (dashed and otherwise) of state communism. So the head marks what Lyutakov left behind when he came to Vienna to finish his studies, and where he met Fauchard. If the head symbolises Lyutakov leaving Bulgaria, then his selection of Fauchard’s Clouds seems to find her, already there, in Plovdiv. The delicate mosaic of eggshells in these works recalls the Roman mosaics of the city, while their curved shapes echo the elegant architecture left by its one-time Ottoman occupiers. As relationship therapy then, the exhibition negotiates the couple’s distances and proximities, and seems a moment in the ongoing task of (re)constructing “home”. This exhibition in Plovdiv therefore includes going elsewhere to discover yourself and then returning this difference (Lyutakov), as well as exploring unexpected continuities in a foreign land (Fauchard, who is French). In a relationship the task is always to find this distance that enables you to be together, while also allowing you to experiment with change. But if this explanation is too romantic, too personal, then more prosaically the fact that the FLUCA exhibition space is a shipping container recasts the narrative as a business of export/import. Today one’s otherness is always monetisable.

If Fauchard’s choice of the “bronze” bust is an ironic and critical gesture that returns Lyutakov’s departure to the city he left, and Lyutakov’s selection of the Clouds suggests Fauchard was related to Plovdiv all along, then the donkey-shit floor appears as the earthy sublation of this dialectic. While the floor clearly chimes with Fauchard’s interest in Arte Povera, it also echoes some of Lyutakov’s happiest memories. Lyutakov learnt the floor’s technique from his Grandmother in Shabla, a small town on the coast of the Black Sea. Since 2007 Fauchard and Lyutakov have run an off space in the basement of his Grandmother’s house called Baba Vasa’s Cellar, a project that seems to encapsulate the exterior/interior relationships that energise the couple and their many collaborative works. Baba Vasa’s Cellar brings foreign artists to Bulgaria, but to a place that is perhaps even more “outside” than where they come from. This internal-outside is precisely the land that our Poetische Tiere inhabit.

This internal outside is the event that is not yet, the one that so delicately brushes Fauchard’s work with its productive uncertainty, and that brings Fauchard and Lyutakov together in the sometimes precarious work of a relationship, and the artistic projects born from it. It is also what embraces the different trajectories of the exhibition’s various elements, as they map the departures and returns of our poetic animals, the nomadic movements that provide the tentative and provisional sketch of “home”. But in art as in life outside the door there always lies the potential of an event that makes everything new, recurring dispersions constituting the common thread of Poetische Tiere. As Nietzsche puts it: ‘we want to be poets of our life – first of all in the smallest, most everyday matters.’