NIGHT OF MUSEUMS AND GALLERIES 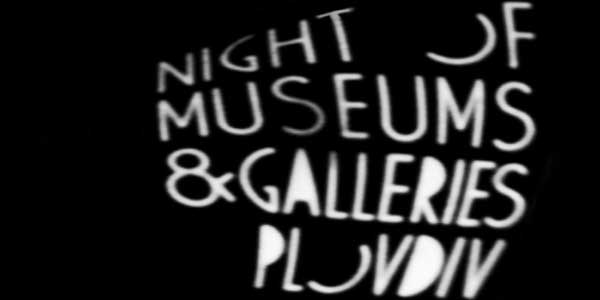 “The Night of Museums” was initiated and held for the first time in Berlin in 1997. Since then the “Night of Museums” format have been acquiring popularity and its realization started all over the world under different names. Today more than 120 cities in Europe organize their local “Night”, an event which has turned into one of the most attended cultural events.

“The Night of Museums” in Bulgaria was held for the first time on a large scale on the 30th of September 2005 in the town of Plovdiv. From then on “The Night of Museums and Galleries – Plovdiv” became an emblematic event on a national level offering a program with various events, high attendance, attracting of young audience, positive energy and organization.

The date chosen for the event is complied with the cultural calendar of Plovdiv, in the framework of the Autumn Saloon of Arts and during the Autumn Technical Fair. Till year 2010 “The Night of Museums and Galleries” has been held on a single day in the end of September. Due to the long list of events in the program and high attendance at the event (more than 25 000 people), in 2010 “The Night” was held in two days – from 19:00 to 01:00
Taking into consideration the success of the two-day-fixed model the “Night of museums and galleries Plovdiv” took program scheme:

Participants in the main program of the Night of Museums and Galleries include all the currently active state and private museums and galleries. Participants in the concomitant program are cultural institutions, theatres, clubs, book-stores, informal art-spaces, lively urban spots. Events in the projects in the open program are produced by cultural organizations or independent artists and curators. Traditionally, 45 is the total number of locations which participate each year.

Each participant organizes a special program for the event. Visitors will be able to observe: art from the cultural heritage, modern and contemporary art from different media, works by local and foreign authors. A big part of the art-events are often highly evaluated by the art-critics. “The Night” around the world as well as in Bulgaria is specific mostly with: projections, concerts, performances, demonstrations, discussions with artists.

There is also a program for children – their cultural enrichment and introduction to art.

For the first time, during the Night of museums and galleries – Plovdiv 2010, at the invitation of Open Arts Foundation, Scala Agency carried out a statistical survey among the audience, which showed that public interest as regards the event continues to be strong. A large part of attendants (30,6%) attended the event for the first time during the Night of museums and galleries – Plovdiv 2010, yet 14,9% visited the event in all 6 years. The new comers are mainly young people in the 18 – 35 age range and more than half of them (55,8%) traveled to Plovdiv from another location especially for the event. The unemployed and students did particularly appreciate the opportunity to attend events free of charge.
More than half of the audience is attracted by the cultural program, the desire for fun or just strolling remains far behind (30%), followed by professional interests in the fields of art or culture (13,8%). The most attractive program was the one presented in the most interesting way: “Museums and Galleries” program approved by 57,5% of all attendants. Afterwards come “Arts in the Open” program (26,9%) and then “Culture at Large” concomitant program (17,1%).
The vast majority of visitors attended both evenings of the event (62,9%). Most of them were in the company of friends (62,9%), and fewer (35,8%) with their family. 89% of the audience would visit the event once again in 2011.

From 2007 Open Arts Foundation is the basic organizer of the event and Plovdiv Municipality the basic co-organizer.

The organization of the Night of Museums and Galleries – Plovdiv carried out over the course of six months by the Open Arts Foundation. The tech team became broader and as far as the social and educational aspects are concerned, the foundation put into practice an intern program (around 14 interns) and a system for participation of volunteers (with more than 50 volunteers).

“The Night of Museums and Galleries” has a developed communication policy in Bulgarian and English. Traditionally, each year the advertisement campaign starts in the beginning of September.

Traditionally the event is supported by: American Foundation for Bulgaria, Vivacom, Plovdiv Municipality.