The curatorial program’s main goal is to present different perspectives on contemporary art and to provide a free space for experiments and new ideas in the specific context of the Night of Museums and Galleries - Plovdiv – time limitations to one or two evenings, its many thousands audience and dynamic atmosphere.

Throughout the years Open Arts Foundation, have undertaken different ambitious productions and co-productions in the frames of the Night of Museums and Galleries - Plovdiv festival. The program has always aimed to broaden the borders and scope of cultural life in Plovdiv, to provoke with new content, to showcase new models and practices and to create a dialogue between art, the audience and the urban space. The 13 Night with the program “Open Arts” synthesizes what we have reached so far and makes a clear statement how will go further – as “night” organisers and coordinators as well as producers and co-producers of new content. “Open Arts”, thanks to our close partners, is the program with the strongest international presence, this year we have participants from Austria, the USA, France, Korea, Spain, Finland and Israel. See more below: 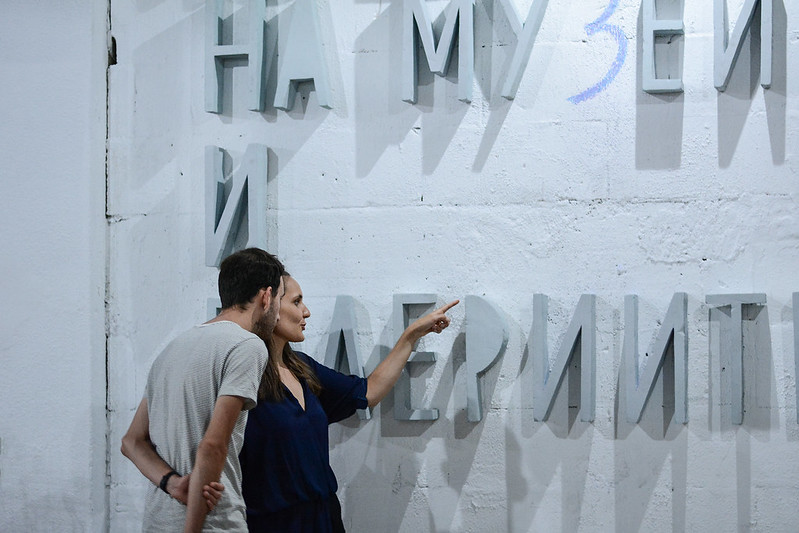 The Open Arts Foundation was created the year Bulgaria joined the European Union and is among the most sustainable young civil society organisations in the country. In the last ten years of open borders it has managed to contribute to the development of a new urban culture, popularise contemporary art and breed new audiences. Its projects on the city and its memory have created an alternative image of Plovdiv and expanded the space for contemporary culture and communication with the world. The anniversary exhibition with the motto HERE EVERYWHERE will share with viewers not only the work done so far but also the motivation, the convictions and the values behind it. Each of the documents, projects and art works presented offer comments on some of the big issues in today’s global world such as the issues of heritage, memory and identity, of new generations and their culture, of communication, social networks, technologies and they are changing the human environment, of the importance of opening up to others, of changing borders, maps and horizons etc. Through the study of this specific case, the exhibition also sheds light on the role of the civil society sector in Bulgaria as a cultural missionary and mediator between the specific environment ‘here’ and international platforms ‘everywhere’.

The exhibition is open until 30 of September

As an on-going research, exhibition and publication project, Proxima Utopia plays with subtitle “a world atlas of utopias, to be considered in the era of post-everything”. Perhaps following a cycle (and anticipation) of global crisis developing today on many fronts, the project is based on the notion that once again, we seem to be drawn to utopias. However, as our understanding of past and present modernities has become multi-centered and more complex, we are witnessing several deviant ways in how future societies are being pursued. Proxima Utopia builds up a project for an atlas that seeks to provide speculative cartographies, fictional collections and iconography for these developments. It is not as such a “mappa mundi”, consisting of everything that we currently know of the world, but more of a design-led inquiry into the “other” directions that global development might take – with or without the benevolent and harmonious past understanding of utopias. While not potentially desirable, the scenes seem yet plausible, deriving from current global politics, power relations, economy, surveillance, the post-internet and the looming ecological changes – the real contexts of future art, design and architecture.

On-going work is a critical definition of our behavior as a social mass. The art work intends to catch the attention on our devalued relation with the nature through a critical look to the collateral effects of our evolution. With the master touch of a stage director, the figures are placed in locations that quickly open doors to other worlds. The scenes zoom in the routine tasks of the contemporary human being. Men and women are suspended and isolated in a motion or pose that can take on multiple meanings. The sympathetic figures are easy to relate to and to laugh with. They present fragments in which the nature, still present, maintains encouraging symptoms of survival. The precariousness of these anonymous statuettes, at the height of the sole of the passers, represents the nomadic remainders of an imperfect construction of our society. These small sculptures contemplate the demolition and reconstruction of everything around us. They catch the attention of the absurdity of our existence. Isaac Cordal is sympathetic toward his little people and you can empathize with their situations, their leisure time, their waiting for buses and even their more tragic moments such as accidental death, suicide or family funerals. The sculptures can be found in gutters, on top of buildings, on top of bus shelters; in many unusual and unlikely places.

Creative Media Lab: Emerging Environments
Curator: Petko Tanchev
Seed, audiovisual performance
Project by Mary Franck
Music composition and production by Robot Koch
“Seed” is a live visual performance of liminal experiences and organic forms.
Expanding on prior work, this is a dream of unfolding spaces and delicate structures. Rendered abstractly, vast, elaborate interiors dilate and collapse, driven by and paralleling layered frequencies of abstract sound. The piece shifts between suggested story and pure abstraction; spaces and textures; complexity and simplicity. Architecturally inspired, it begins in constrained spaces with erratic motion, then moves through a maze of cavernous halls and ambiguous thresholds and liminal spaces until, finally, expanse and florescence.

This masterclass will cover some fundamentals of generative design and procedural animation, then dive into specific workflows. Participants will learn processes for combining the intricacy of algorithmic design with the expressiveness of manual 3d modeling. They will then learn how to manipulate these designs as performable, real-time animations. It will be taught in Blender and TouchDesigner. Prior knowledge of these software programs will be helpful but is not required. The participation in the masterclass is free. To apply, please send your CV and/or Portfolio in pdf to opencall@openarts.info until 01/09/2017. The selected applicants will be contacted before 04/09/2017. The maximum number of participants is 15.

Supported by U.S. Embassy in Bulgaria 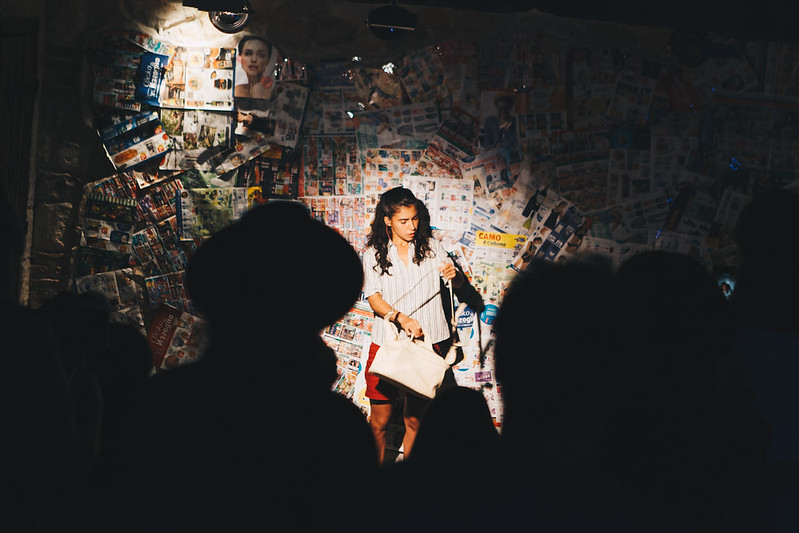 I AM/Ballage – project by Vox Populi

I AM/BALLAGE is a performance installation and social experiment where several families collect the empty packaging of the products they consume for a week. This packaging and the personal stories of its consumers is the basis of this unique experiment in which every contemporary person is reflected – somewhere between the supermarket shelves and the search for their own identity.

Supported by Plovdiv Municipality on the program “Civil Participation” 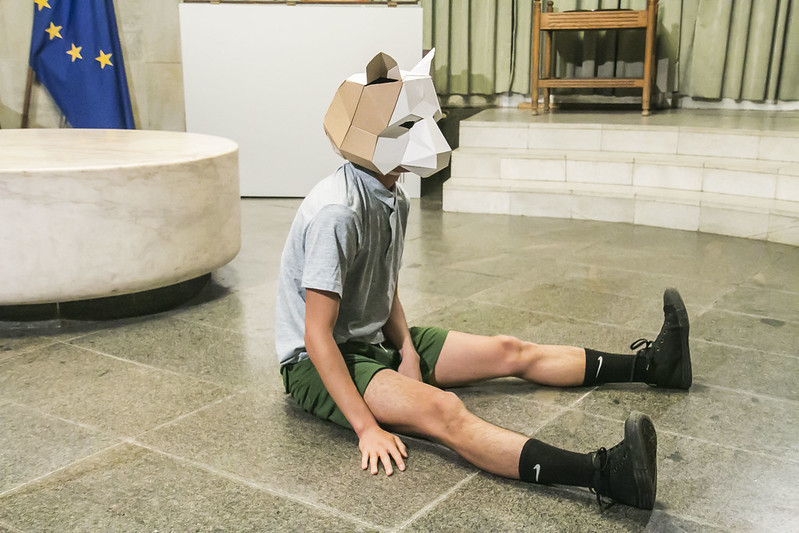 Supported by Seoul Foundation for Arts and Culture 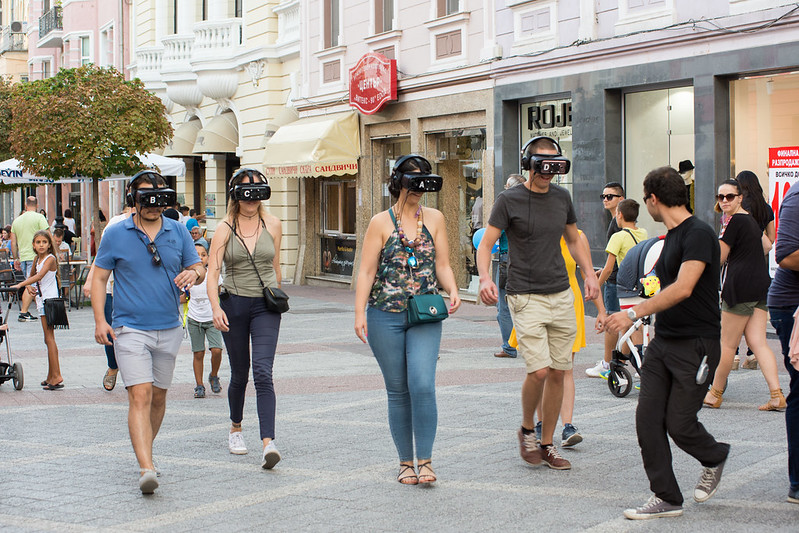 Starting from the postulate that there is no reality but rather a set of paradigms which influence our perceptions of reality and defining our relationship to the world, AR2.0_Alphaloop will explore this problematic hijacking traditional use of mobile phones through a participative, immersive and ambulatory experiment. This communication prosthesis becomes here an artificial organ of perception which substitutes to the ones of every user. The public space becomes from there the theater of a strange technological ritual which will open some backdoors through the reality. During the Night/Plovdiv, groups of participants could postulate five by five for a 25 minutes walk around the city. Subscribe for a walk at participants.night@openarts.info 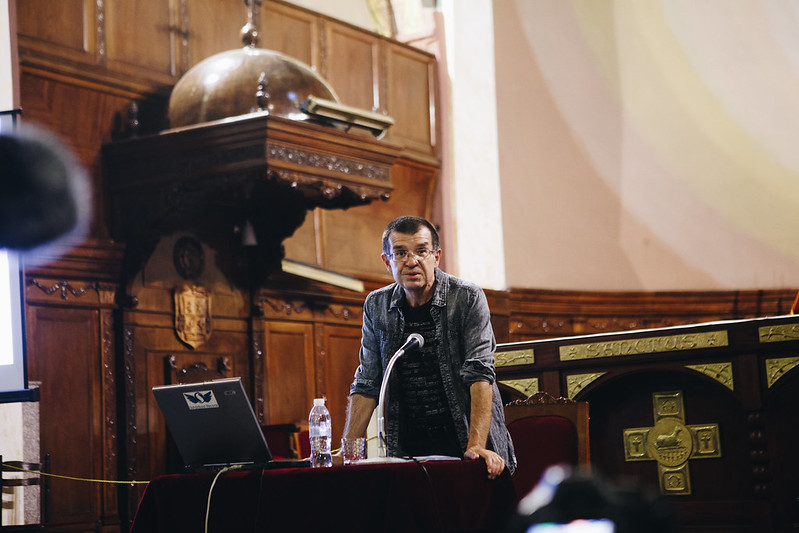 Sacred Art and the Present-day – lecture by Prof. Ph.D. Vladimir Gradev as part of the educational platform “Introduction to Contemporary Art”

“Introduction to Contemporary Art” will present an extra lecture specially prepared for Night of Museums and Galleries - Plovdiv 2017.

Is art still sacred? This will be the main question discussed in the lecture based on the Vatican Museum’s Borgia Apartments contemporary art collection, attempting to show the modernity’s artistic experience as an end result of a millenial tradition. The lecture will argue that contemporary artists are the descendants of the Christian tradition, albeit often wasting this rich heritage like a prodigal son. The lecture will also dwell on the issue of the fault between art and truth and trace the old and new links between aesthetic and religious experience. We will look at ways Divine Glory, radiance and beauty may appear and be percieved even today in our secularised and disenchanted world which negates art’s supreme function thus putting art itself in question. 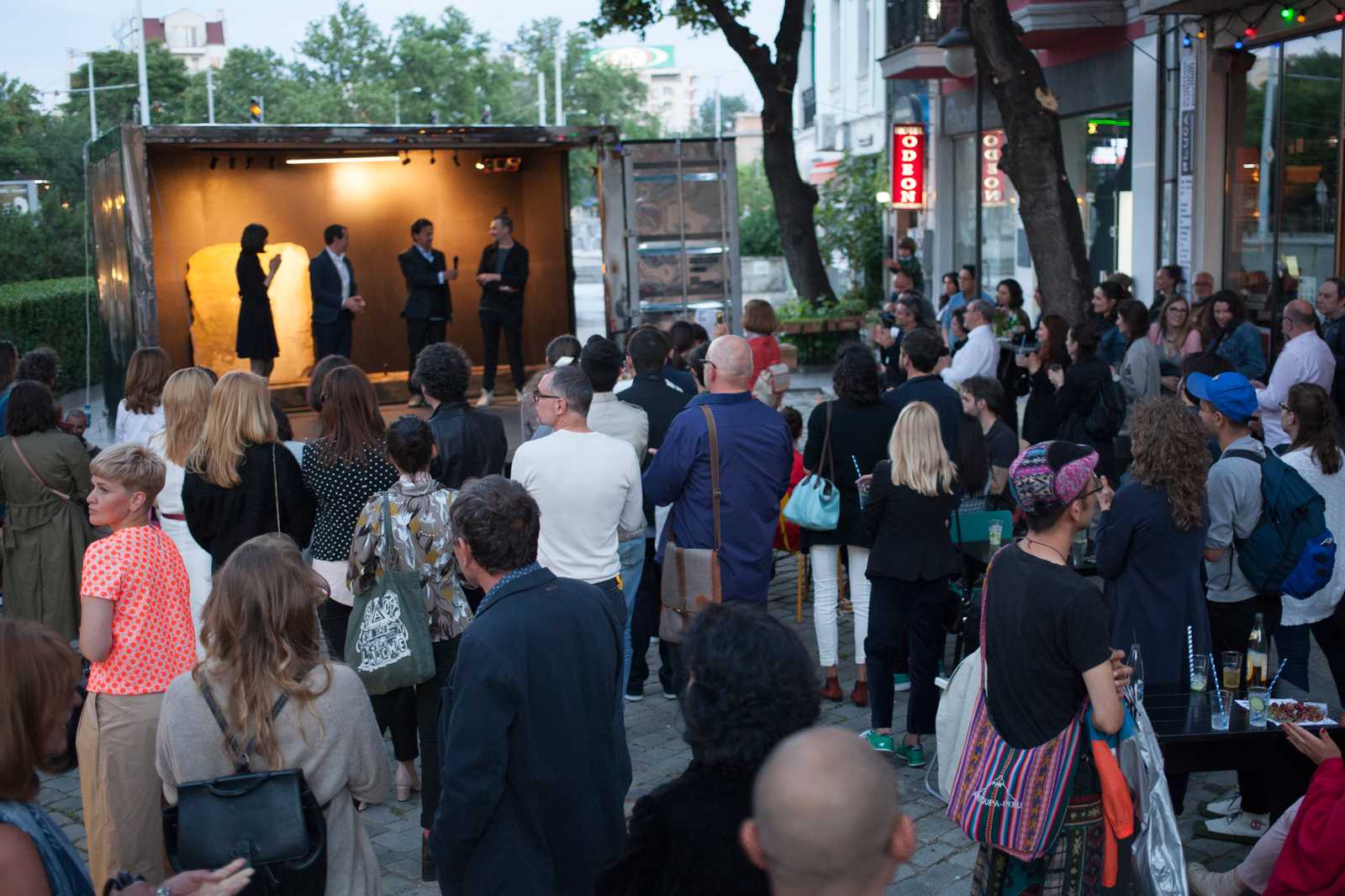 Supported by Israeli Embassy in Bulgaria

Relevant discourses in art today are associated with the current situation in local and transglobal societies. We are challenged to see the complexity of our present moment, of socio-economic relationships and phenomena of specific transcultural dynamics. How can we develope a practice through which one is capable to explore the virtuosity of urban space, especially in the perception of time, place and body. After doing investigate researches the involved artists have produced specific works. As Shannon Matters has argumented recently in her essay for the urban magazine „dérive“– a city is not a computer. In her text she pointed out that google constructs urban infrastructures. The city is a matrix and container of informations, but the eco-system is much more complex as the postpolitical argumentation about it. The public space symbolically stands for dialogue, ethics of coexistence and the birth of transcultural interactions the reexaming and production of public space from different resources. 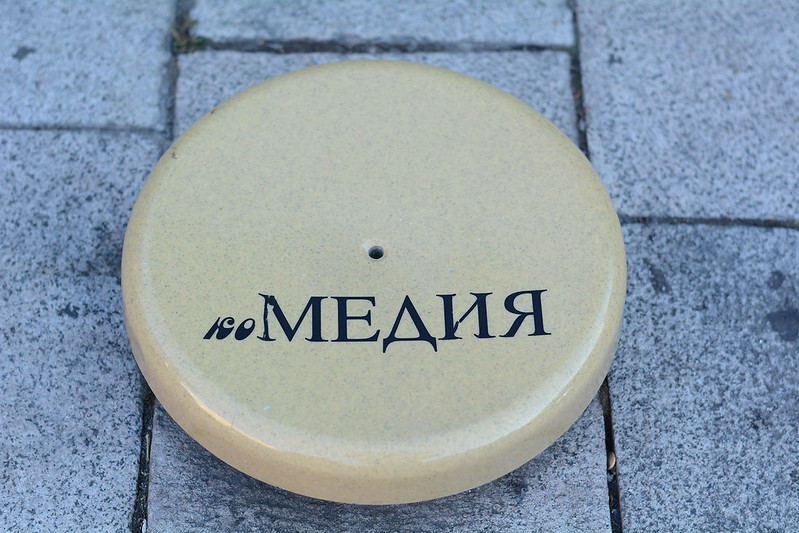 The project is specially developed for Kopchetata – a popular place for meeting people in the city. The artist uses small round seats lined in the square in front of the Plovdiv municipality building to visualize a new approach to language as a form of communication and vehicle of content. Through different ways of writing, fonts and their attribute series CDoupbles (portmanteau from couples and doubles) and SyllaBLEndings (portmanteau from syllable and blendings) uncover possible meanings in various words and word combinations in Bulgarian, English, French, German and turn them into a specific concrete poetry. The words are chosen to construct unexpected links in a space where the bisector is connected to happiness, meaning to speech, the end to heaven, creating to giving and many more. On the 15th and 16th of September at 6 everyone will be welcome to the square to read their chosen word or words as part of the collective reading flash mob lead by the artist.

Veronica Tzekova is the first Bulgarian artist presented by the Open Arts Foundation as part of the In Situ European platform for art in public spaces.

Look forward to these free events in the three evenings of the Night of Museums and Galleries - Plovdiv and keep track of the interviews with their authors on www.night.bg/blog

Co-organizers of the Night of Museums and Galleries - Plovdiv Festival are America for Bulgaria Foundation and Plovdiv Municipality.